Loss of first-phase insulin secretion is an early sign of developing type 2 diabetes (T2D). Ca2+ entry through voltage-gated L-type Ca2+ channels triggers exocytosis of insulin-containing granules in pancreatic β cells and is required for the postprandial spike in insulin secretion. Using high-resolution microscopy, we have identified a subset of docked insulin granules in human β cells and rat-derived clonal insulin 1 (INS1) cells for which localized Ca2+ influx triggers exocytosis with high probability and minimal latency. This immediately releasable pool (IRP) of granules, identified both structurally and functionally, was absent in β cells from human T2D donors and in INS1 cells cultured in fatty acids that mimic the diabetic state. Upon arrival at the plasma membrane, IRP granules slowly associated with 15 to 20 L-type channels. We determined that recruitment depended on a direct interaction with the synaptic protein Munc13, because expression of the II–III loop of the channel, the C2 domain of Munc13-1, or of Munc13-1 with a mutated C2 domain all disrupted L-type channel clustering at granules and ablated fast exocytosis. Thus, rapid insulin secretion requires Munc13-mediated recruitment of L-type Ca2+ channels in close proximity to insulin granules. Loss of this organization underlies disturbed insulin secretion kinetics in T2D. 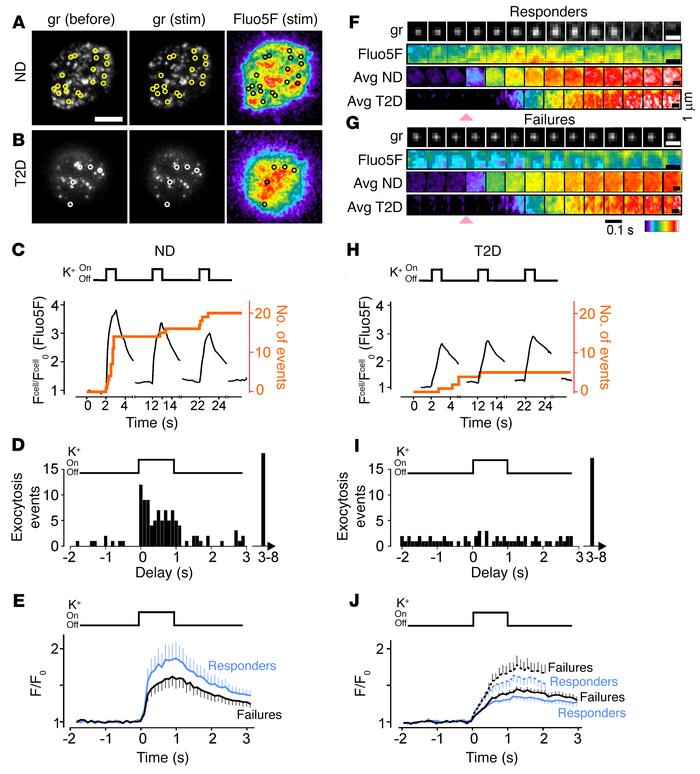 ( and ) TIRF images of a ND () and T2D () human β cell expressing NPY-mCherry (see “gr,” granule) and loaded with the Ca2+ sensor Fluo5F (right), before and during (stim) stimulation with 75 mM K+. Circles indicate the location of exocytosis events. Scale bar: 5 μm ( and ). () Time course of Fluo5F-Ca2+ fluorescence (the whole-cell signal was normalized to prestimulation, Fcell/Fcell0; black lines) and cumulative exocytosis events (orange line) in a cell periodically stimulated with K+ as indicated. The stimulation was carried out for 1 second, with an interval of 9 seconds. Imaging was performed from 2 seconds before until 2 seconds after each pulse. () Exocytosis events as a function of time relative to the most recent K+ pulse in 22 cells, as in . () Average Fluo5F fluorescence from responders (blue) and failures (black), aligned to the onset of the K+ application and the center position of each granule. There were 102 granules each in 22 cells from 8 ND donors. = 0.033, by Student’s test, for the difference in peak amplitude. () Examples of an individual granule undergoing exocytosis (gr), the Fluo5F signal for the same granule (Fluo5F), the average Fluo5F signals for 102 responders in ND cells (Avg ND), and 104 responders in T2D cells (Avg T2D). Sequences were aligned to the onset of K+ application (red arrow). Note the different spatial scale for the example and the averages. () As in , but for granules that failed to undergo exocytosis (failures). In and , the image frames are shown for every 0.1 second. Arrowheads indicate onset of stimulation. Scale bars: 1 μm ( and ). (–) As in –, but for 104 granules each in 26 cells from 7 T2D donors. Dashed lines in indicate a subset of 8 ND cells with the highest cell-averaged Fluo5F/Ca2+ responses.